It’s been a very long time since my last update… Almost a year and a half, even. So I think a new post is way overdue. And with a new post comes a new announcement!

The Last Year and a Half
I haven’t been able to post here very much lately (at all, in fact) because I’ve been just overwhelmed with University work. Last month I started my Master’s Degree in Computer Science Engineering, which means I’ve now completed my Bachelor’s Degree (well, actually I need 6 more credits for it this year, but that shouldn’t be a problem). This gives me a year of a little less work (but still a substantial amount) before I have to write my Master’s Thesis. Sadly, all this University work also kept me from participating in one of my all time favourite events – Ludum Dare. BUT, I will participate in the next one, Ludum Dare 34, which starts in a little less than 10 weeks! It’s still possible that some kind of University thing gets in the way, but I’ve been trying my best to keep the weekend of December 11th-14th completely free and so far that seems to have worked.

This last year and a half I’ve quietly been testing a lot of different concepts and game ideas. Some of which kind of worked, while others completely didn’t, but all of them would required a huge amount of work to make into a finished product. The development of the most recent idea I played with could be followed on Twitter. It is/was a HTML5 RTS game, as you probably can guess from these screenshots (using developer art). I stopped developing that game halfway through July for now because some terrible things happened in my close family which required all my attention at the time. But now things have settled down a bit and the new academic year has also slowly started settling down, which has gotten my creative juices flowing again. For most of August and September I’ve been working on a new game engine using LWJGL 3 and have been trying out some other new stuff. 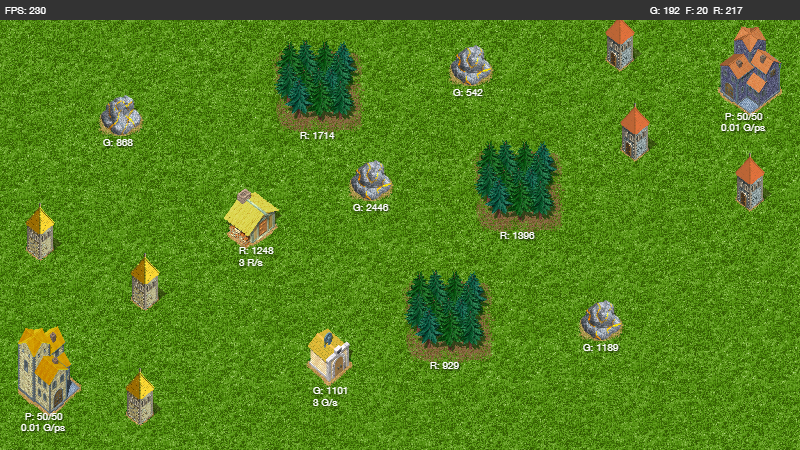 The Unnamed HTML5 RTS Game I worked on for a few weeks.

Coming Up Next
For some time now I’ve been wanting to publish something on my rather empty Itch.io page. But it’s really hard for me to be satisfied enough with a game to the point that I’m feeling comfortable enough asking money for it, even if it’s a pay-what-you-want kind of deal. So, in order to get something out on Itch.io, bridge the gap to the next Ludum Dare, and test my new engine, all at the same time, I’ve decided I’m going to do a remake of FedIt!, taking into account all feedback I got on the original version for Ludum Dare 29 as best as I can. This means I will rebalance the game, making the difficulty scale a bit better (it probably still won’t become an easy game, though), adding some little special effects (making the game a bit more “juicy”), and I’ll probably end up having some kind of progression system. I’ve already planned most of this out, but I’m not committing to too much yet so I’ve still got room to change things around whenever I feel like it.

The Way it’s gonna Work
With the development of this “full version” of FedIt!, I want to try something else that I haven’t done before, and that’s posting devlogs. That way I’m hoping I can keep really committed to the game throughout development, and it’s a nice way to keep writing these blog posts. Writing is something I really do enjoy doing but it can be so hard to find the time and motivation to actually start. I will be dividing the development of FedIt! into three big cycles and write a lengthy development progress post after each cycle. The first cycle will be the Alpha phase of the game in which I’m just going to remake FedIt! with all the features it had in the original Ludum Dare version but in the new engine. This alpha version should be out by October 18th, which is about two weeks from now (look at me committing!). This should give me more than enough time to get all features the Ludum Dare version had into the game. And since I’ll now be having more than 48 hours, I’ll be able to make it more or less bug free by that time. So, October 18th you can expect a development progress post and a free, playable version of the alpha version of the game. It is possible, however, that I write a progress report before that, this will depend on how much I have to say and what problems I encountered during development. The next version will be the beta version of the game, which should be released by the end of November. The beta version will be feature complete. So all new things I want to incorporate into the game should be in by then. So the beta version will feel less like the original version, and more like what I want the definite version to feel like. So, then I’ll be actively trying to get some people to really beta-test the game in order to fix most bugs before release. For which I’m aiming for the end of this year. I want to get FedIt! out by the end of December, that way I’ll be able to take some downtime during January, when I’ve got my first set of finals for this academic year, and maybe start a new project in February of 2016. Depending on how both this game and the upcoming Ludum Dare went. The full release of the game will contain updated graphics from the alpha and beta versions, probably will need some more rebalancing depending on the feedback of the beta-testers, will contain bug fixes people have reported, and might include a few more things which I have labelled as “nice-to-have” for now. If I find the time to try some of them out. So it’ll more or less be the same as the beta version gameplay wise, but should feel smoother, look nicer and perform better. Or that’s what I’m aiming for at least. Ludum Dare 34 also falls in between the beta release and the full game release, so it might be hard to get new stuff in for the full release. It’ll all depend on what will be going on at University at that time, but I’ll most certainly do my best to make this game the best it can be.

The original FedIt! made for Ludum Dare 29 didn’t look that great, looking back on it.

So, for now I’m going to leave it at this. This already is a pretty long post. In fact it might be my longest yet, including my old blog page. You should expect at least 1 new blog post by October 18th, maybe earlier, I don’t know yet. But anyway, you’ll hear from me soon! 🙂

P.S.: people interested in Pixel Art should definitely check out Pixel Art Academy by the always amazing Retronator! The Kickstarter is closed for now, but I’m pretty sure it’ll still be possible to enter Pixel Art Academy at a later date if you want to. It’s an amazing project by an amazingly talented (pixel) artist!

I'm an indie game developer, creating (mainly) video games from the great city of Aalst, Belgium.
Besides video games, I occasionally make websites, videos, music and other creative stuff, a lot of which you can find here.
I'm currently getting a Master's Degree in Computer Sciences at Ghent University.


Mail me!
Tweet me!
Fork me!
Play games with me!